After a Chicago car accident, parties usually exchange information so that everyone is on the same page and insurance and other claims can be filed. Some people assume, however, that just because the accident is over, that the danger associated with being on the road is over. Before exchanging information, it is crucial that you and the other party or parties involved in your accident move your vehicles and yourselves to a different location, assuming this is possible. Otherwise, you may be at risk of getting hit by a passing car.

Following an accident, once the dust settles and the initial shock wears off, it is crucial that you remain vigilant. The first thing that you should do if your accident is obstructing the road, is to see if you can get out of the path of active traffic. Although there are a number of things that drivers should do following an accident, safety is still number one. You can get the other party or parties’ insurance and contact information after you are safely out of the way.

END_OF_DOCUMENT_TOKEN_TO_BE_REPLACED

Pedestrian accidents can cause serious injuries and fatalities

With social distancing measures remaining in place, more pedestrians than ever have been heading outdoors to enjoy the weather while it lasts. As a result, motorists need to also exercise more caution while driving, as pedestrians are often out at all hours walking, running, or biking around local neighborhoods. Most people know that when a pedestrian and a driver operating a vehicle are sharing the road, pedestrians get right of way. However, when drivers are negligent or purposely don’t yield to pedestrians and cause serious injuries or even death, they can be held accountable for their actions through a Chicago car accident lawsuit.

In a recent news report, a man was hit and killed by a semi-trailer truck at an intersection. The driver of the truck was at a red light when the pedestrian was walking between vehicles in the roadway. The truck proceeded through the intersection but was waved down by multiple witnesses who told the driver that the pedestrian was hit by the rear passenger-side tires of his vehicle. The pedestrian was pronounced dead at the scene and the truck driver was ticketed for a failure to yield. According to local authorities, the investigation is ongoing.

END_OF_DOCUMENT_TOKEN_TO_BE_REPLACED 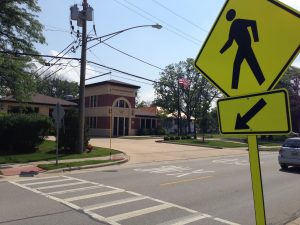 Recently, a pedestrian was struck and killed in a tragic Chicago pedestrian accident on a road near the Chicago O’Hare International Airport. According to a local news report, the 70-year-old Hanover Park man was pronounced dead after being transported to Advocate Lutheran General Hospital shortly after the crash.

Witnesses noted in the report told authorities that the accident victim was in a roadway near the international terminal at O’Hare when he was hit by a city-owned tow truck. According to the report, the accident did not occur at or near a crosswalk.

Pedestrians should always use crosswalks when crossing roadways, if they are available. Of course, drivers still have a duty of care to avoid hitting pedestrians in the roadway, even when the pedestrian is not crossing at a designated crosswalk.

END_OF_DOCUMENT_TOKEN_TO_BE_REPLACED

In Illinois, traffic can take many forms. Cars, trucks, SUVS, and vans are common on our roadways but they are far from the only types of traffic in the state. Bicyclists, motorcyclists, and even pedestrians can all be traffic and can affect the road conditions of those around them.

Unfortunately, this means that no one is safe from the threat posed by a traffic accident or a collision as these incidents can happen with little or even no warning. Often, an innocent party is involved in a crash when another person makes a mistake or an error, causing someone who did nothing wrong to suffer nonetheless. This is a common tale when a pedestrian is struck by a motor vehicle in Chicago or the surrounding suburbs and may lead to the need for emergency medical treatment.

But why do so many pedestrians find themselves the victims of collisions, and what can be done to reduce those crashes? According to experts, eliminating distractions among drivers and pedestrians alike may do much to protect public safety and improve the driving and walking conditions for all.

END_OF_DOCUMENT_TOKEN_TO_BE_REPLACED

By now, thousands of tourists and many native to Chicago are prepping for the start of Lollapalooza, the major music festival that takes place in Grant Park every year. Unlike many of the prior iterations of Lollapalooza, the festivities will begin tonight at 7:00 p.m., stretching the festival over the four day period from Thursday through Sunday. Lollapalooza boasts eight separate music stages and more than 170 music bands during the course of the festival that is expected to entertain hundreds of thousands. In fact, in three days last year, total attendance reached more than 300,000 with approximately 100,000 in attendance daily.

A recent article in the Chicago Tribune noted that area hospitals treated 88 intoxicated teenagers during a three-day Lollapalooza in 2015. That was a decrease from 2014 but still almost nine times as high as an average weekend in Chicago, indicating that emergency rooms in the city may be overrun at times during the festival this year.

END_OF_DOCUMENT_TOKEN_TO_BE_REPLACED

Pedestrian safety matters to everyone in Chicago because everyone is a pedestrian at some point in time. Most people who frequent the downtown area walk quite a lot. They may walk the streets to get to lunch or simply walk from a parking spot to their office. Others walk from an L station or a bus stop to their jobs or they may walk to Union Station or Ogilvie to head home in the evenings. Even hailing a cab or an Uber ride may require a small amount of walking.

If you ride a skateboard, coast on some in-line skates, use a walker or a wheelchair, push a stroller (or ride in one for that matter), or simply use your feet to get around, you are classified as a pedestrian in Illinois.

Though everyone should be aware of pedestrian safety issues and should act in a manner that limits the number of pedestrian accidents that happen every year, recent data from the National Highway Traffic Safety Administration (“NHTSA”) reveals that not enough is being done to keep our walkers safe. Far too many are losing their lives or becoming seriously injured in traffic collisions and the harm that is caused by these events extends to victims’ family members, friends, loved ones, and coworkers.

END_OF_DOCUMENT_TOKEN_TO_BE_REPLACED

Pedestrian safety concerns should be important to our citizens for two primary reasons: first, everyone is a pedestrian at some point in time and therefore may find themselves the victims of a crash, and second, if you use any form of transit other than walking, you may collide with a pedestrian and cause that individual harm, potentially leading to legal consequences for you.

So if pedestrian safety continues to be a problem and one that affects everyone, what can be done to improve the state of affairs in our neighborhoods?

END_OF_DOCUMENT_TOKEN_TO_BE_REPLACED

When a pedestrian is involved in a traffic collision, the results are almost always calamitous for the victim. In fact, in 2013, there were 4,718 pedestrian accidents in the State of Illinois. Of those, 4,419 caused injuries and 115 were fatal. This translates to more than 96 percent of all pedestrian collisions causing either injuries or death – an absolutely staggering number that reveals the extreme threats posed by these accidents.

But the harm to those involved reveals just a snapshot of the overall suffering that is caused when a person is involved in a pedestrian incident. In addition to the injuries caused, a victim may incur medical expenses, suffering pain and anguish, and may be forced to miss time from work. That victim’s family will also incur damages as their lives are affected and those who love and work with victims will suffer as well. The economic toll of pedestrian collisions across the nation is estimated to be in the billions of dollars every year with some collisions causing damages that last a lifetime.
END_OF_DOCUMENT_TOKEN_TO_BE_REPLACED

On Monday night, the Chicago Blackhawks won the Stanley Cup by defeating the Tampa Bay Lightning. Now, with the historic trophy back in Chicago for the next year, the city is coming together to celebrate the victors like no other city can.

Tomorrow morning, the festivities will begin at 10:00 a.m. with a victory parade traversing much of the downtown area. It will end at Soldier Field where the players will enter the stadium with the Stanley Cup and a rally for the team will begin. Many guests are expected to attend and anyone who wishes to be present at Soldier Field can obtain free tickets through TicketMaster beginning on Wednesday afternoon.
END_OF_DOCUMENT_TOKEN_TO_BE_REPLACED

Many people in Chicago fail to realize how frequent pedestrian accidents occur in the city and how many of those accidents involve one or more vehicles. From collisions at intersections to those in parking lots and crashes near school zones, pedestrians face a multitude of risks as they travel across the city. When an accident happens, the pedestrian involved is injured or killed most of the time and these damages cause a ripple effect that reaches a victim’s family members, friends, and loved ones.

But why should people who walk have to suffer when a driver acts negligently and causes an accident? In Chicago, the answer may be that the victim has the rights and options to seek relief to stem the harm and compensate the injured for the damages caused by a crash. These claims are separate and distinct from any charges that may be brought against the driver by the State of Illinois or any traffic offenses for which the driver is ticketed. However, these claims must be brought in accordance with all state and local laws and within a specified time period so victims must take certain steps to ensure their rights are protected. Speaking with a personal injury attorney can help victims understand their legal options and can help them move forward with a claim for relief when that accident happens in the Chicago area.
END_OF_DOCUMENT_TOKEN_TO_BE_REPLACED

Search
Our Other Blogs
Recent Entries